So this is not going to be a dispassionate movie review. If you are looking for one, please go read some other one. I went to watch Kabir Singh because this is *exactly* the kind of behaviour which I think is all wrong with men, even in this day and age. And this is *exactly* the kind of proprietorship behaviour which must NOT be celebrated in the movies. ‘Woh meri bandi hai’ goes the hero to justify any stalker-like crazy behaviour which he portrays. Nope, Nein, Na-da. Woh teri property NAHI hai!! Period!

Let’s go first with the positives of the movie (coz well, if it’s just taken as craft, it is a very well-made one). Shahid is brilliant in his portrayal of misogynistic, over-possessive, angry lover surgeon. Kabir is a mad genius. We have to understand certain behaviours here. Men who perpetrate such crime are not necessarily some stupid crazy men. Many of them are highly intelligent, accomplished, passionate men who excel in other fields of life. It’s that same passion gone all wrong. Kabir for example is a straight A student, football captain, blah blah blah. But he has serious anger issues. In the very beginning of the movie, he is shown getting crazily furious at the house help because she breaks a glass. The audience is laughing as he chases her down the flight of stairs and then out of the building. I cringe in my seat. What’s so funny about it? This is purely making mockery of abuse of domestic help!!! Definitely NOT funny!

Next, he gets madly angry in a football match. Has no regard for authority. Beats the shit out of opponent. Again audience is jeering and there is clapping. Baap re! Pagal hain kya! But very very frankly, this is the exactly the kind of bad boy behaviour which I also found very attractive in college. A guy laying claim over you and telling the whole college – ‘Ye teri bhabhi hai’, ‘Isko dekha toh aankh phod daalunga’, ‘Paas aaya na toh taange tod dunga’…. and many more such dialogues seem so appealing at that age na! Coz most of us are fed on media images, and the quintessential bad boy image who loves you so crazy, he marks his territory seems very seductive with hormones raging.

In a college scene where Kirti walks in as a first year student, and Kabir can’t stop staring- a scene which legitimises eve-teasing (yes, yes, we know men look at women. Be discreet! If you are making her uncomfortable, STOP!) He then walks into her class, orders the boys to lay off her, dictates which friends she can have, asks her to step out of the class so that he can teach her ‘anatomy’, kisses her in front of the college, all without consent and Kirti meekly obliges to each without a peep. Super! As someone said 1 hour into the movie, arre heroine ka ek dialogue aaya! Unfortunately, in most Indian households, even today, that’s exactly how girls are brought up. Meek, obliging, not raising a voice and definitely not saying NO! Of course, eventually she falls in love with him. And of course, ultimately when her parents don’t consent to the marriage, he gives HER one tight slap! I literally cowered in my seat in this scene! Nope, she did not hit back or scream for help or call 100! That would’ve shown the right approach to such violent behaviour! But NO! She goes on to marry him!

Issue with these kind of movies is that most of us never grow up, especially men. And THAT is going to be the side-effect of this cinema. An alcoholic, druggist, abusive man with anger issues has been glamorised as a super-intelligent, hot man whose behaviour everyone endorses and ultimately, he gets the girl. Sigh…. all in the name of love. And when they don’t get the girl, there are acid-attacks, sexual harassment, rapes and murders. Coz life isn’t a movie. AND this ain’t love baby. This is madness, lust, desire, control and over-possessiveness. And the solution is to go to a psychiatrist, and sort out the anger issues before you self-destruct yourself, and someone else in the process.

Dear movie-makers, please stop glamorising it. Wish the movie gave some answers as to how this behaviour could be rectified. But here, it seems rectified only when he finally marries the girl, and they supposedly live happily ever after. Aisa nahi hota. Situations happen, and anger rises again. As marriage is not happily ever after. It is a lot of work towards building a relationship and life together based on compatibility and mutual understanding EVERY SINGLE DAY. And with the pressures of modern life, it’s definitely not a cakewalk. So sort the mental-health issues, PLEASE!

Anyways, the movie is worth watching for some fabulous acting by Shahid, and boy he does look hot. Those low- waist pyjamas…. he owns them! Kiara Advani has played the submissive Indian girl really well. She doesn’t even raise her eyes, let alone her voice. Rest of the cast has done their job too. The songs are hauntingly melodious.

But please, oh please, send out the message that this is exactly the kind of behaviour which is all wrong and DO NOT idolise Kabir Singh. The fact that this movie got made in this day and age portrays a mirror of the society that this STILL very much exists- and in the crème la crème of the society.

Please help change the mindsets. Before it gets too late.

This review was first published on https://surbhirastogi.com/ 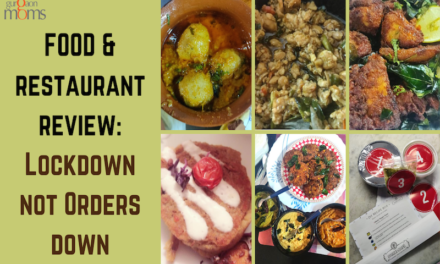 Lockdown Not Orders Down