What is a mother’s bane most of the time? To make sure that her kid eats well and especially so in school. When GurgaonMoms announced the event on Quick and exciting Tiffin Bites it made me smile. It was as if she had read my mind, and as one saw from the response, the minds of many others.

On Tuesday, July 16, 2013 we all made our way to  the Godrej Nature’s Basket outlet at DT Mega Mall in Gurgaon. The table was set, the induction plate was hot, a variety of ingredients were waiting for the celebrity gastronome and all of the GurgaonMoms community attending the event was waiting with bated breath for secrets to be revealed and ideas to be shared.

We were not disappointed. Rushina M Ghildiyal the celebrated food critic and writer from Mumbai, started the event on schedule and what followed was a very lively interaction between her and the audience with personal anecdotes making the session come alive. A quick introduction of all the Moms in the audience and the reasons for their participation elicited a lot of laughter. While all wanted new ideas for the children some Moms also wanted tiffin ideas for husbands!

As our celebrity guest went through the live demonstrations of the recipes one could see that she had given careful thought to her selection. The base recipes were simple and could be tweaked for variation , to suit a non-vegetarian, the lactose intolerant, the vegan. The recipes included ingredients easily available and the time taken for preparation was minimal. In fact, the Moms were treated to the tasty bites as each dish was prepared. Trail mixes proved to be a good recipe to start , with a variety of nuts being roasted. Soon the aroma of sesame was wafting through the air and

many of us wished we could be children again to be indulged with such tasty treats. What fun to be able to make round balls of the nut mix and wrap them as toffees. Imagine the delight of the child when he would open his tiffin box? Nuts as we all know are highly nutritious , contain fibre, natural sugar and are an extremely potent source of energy in small bites. Sesame is a wonder nut as it contains enormous amounts of calcium – especially useful to those who are vegan or lactose intolerant.

An important learning was that unhusked sesame can also be sprouted. Soak for an hour. Drain the water. Layer a casserole with kitchen tissue, put the sesame on it and leave in the fridge to sprout.

The second recipe of Yoghurt and Sesame Gratinated Potatoes would be delicious in the tiffin box of a slighter older child or even an adult. Potatoes are a staple in most households and this preparation was powerpacked with carbohydrates and the goodness of yogurt and sesame. A big advantage was this could be pre-prepared and tasted equally delicious as a cold dish, a side dish, a starter. Imagine how ‘adult’ a child would feel popping each mini-potato in his mouth on a toothpick?

Button Mushroom Pasta was the third recipe to be demonstrated. Rushina added that this preparation could include any other vegetable as well. She laughed when she gave her reason for using penne – that the veggies would go into the ‘holes’ of each pasta and thus the child would have no choice but to eat it

This recipe brought forth a discussion on the kinds of oil to be used (unanimously agreed that what we grew up on was best and cold pressed oils were healthy), the way pasta should be boiled (100 gms uncooked pasta to a litre of water) and a learning that dried mushroom powder was a great thickening agent and a healthy substitute for cornflour.

The final recipe for the morning was Crispy smoked chicken peppadew quesadillas. The dish was prepared sans chicken for the vegetarians and each one was left licking their fingers. Again, the aroma of melted cheese , something an active and growing child can easily digest, coupled with fresh spinach was  a gastronomical delight. One could easily prepare the same using chapatis and make wraps.

GurgaonMoms had every effectively built up a buzz to the event via a contest for the Moms. Lucky Mom, Manjusha Ashutosh Sinha, walked away with a lovely hamper of goodies sponsored by Godrej Nature’s Basket for her unique recipe of Badaam Modaks.

Where two hours flew one didn’t even know and we all left the venue happy and charged ready to enter our kitchen with new ideas.

Thank you GurgaonMoms for a very interesting event. Looking forward to the next  kyonki yeh dil hamesha maangey more 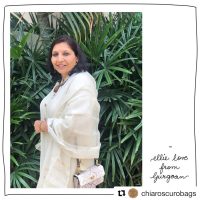 What goes in your Restaurant Bill?