What is Durga Puja?

Now, strange things happen at times at most habitual moments. Like when they asked you to tell them "something about yourself" at your first job interview, and you looked blank. You did not know, until then, how difficult it could be to be asked to summarise your own self, in precise words and well-formed sentences, conclusively and sufficiently! You do not know where to start, what to carefully keep aside, what is just yours and not for the world to know, and what preciseness of the reply would fit the bill right, that is, to leave your audience engaged and pleased and to still be honest and at it. When confronted with casual curiosity, or even courtesycalls, on something so damn close to you that you've grown up to belong to it or to be it yourself, it really gets bad. I know I am getting too gibberish for you to keep on reading this piece, especially in a season where you've so much to otherwise, and I duly apologise. Give me a chance to defend. I'm just back from a very sudden going-total-blank-at-a-most-obvious-question situation at a non-Bong gathering. They casually, only slightly curiously, had just asked me one simple well-meaning question:

"What is Durga Puja?"

Talking of immediate reaction to it, and as you must have figured out already, yes, I went blank! I stopped short, I fell short of words.

They, hopefully, took my long silence and inward desperation for search of word empathetically, though they would not know how difficult it is for a inside-out Bong to attempt to explain Durga Puja to them at one go, give them a ready yet satisfactory answer without fumbling at words, without soul searching deep and hard on which version, which story of Durga Puja, does she herself believe in, and which she should put across to them, so that they get the essence, and how much not to say, knowing well that one would just not understand because, simply because, one cannot!

How can I explain to them that, while a staunch atheist that I am – one who neither believes in idol-worship or carrying a symbol of marriage, nor believe that a dot or a line of vermillion on the vermillion, made of mercury, can help her husband live any longer – I still, happily and willingly, with all my might, love Durga Puja as if it’s a very part of me myself? How can I make them realize, to feel, to trust that Durga Puja is not a matter of just religion or custom, of social or familial order, but much, much more beyond that? That it is, it is… sheer magic? How can I tell them, well enough, what Durga Puja is?

Someone suggested: “Bengalis wear new clothes on each day of Durga Puja, right?”

I nodded, “Yes!” I cannot tell you how, almost instantly, I went a two and twenty years back into the past… It flashed before me like a picture, how as a kid I used to get new clothes from relatives, how we – I, my brother, our cousins, neighbours, school friends – would contest on the number of clothes we’ve got, unfailingly exaggerating the number a tad on the higher side to feel better. How, a month before the my Mom used to start drawing up her shopping list and budgets months in advance and flag-up the money number to Dad every other day, with newer (and higher) quotes every time. How then, one fine day, dad won’t go to work and we not to school, and instead we’d hop into a taxi and go New Market, first shopping for the clothes with softdrink and chicken roll breaks in between, and wrapping up in a serpentile queue before the most popular “Free School Street” Sree Leather’s shop for shoe-shopping! How, once we were home after the long day, I and my brother to put on the clothes on our very sweaty torsos, trying them out in front of the mirror, reassessing and reviewing the choice, its quality and prices. How, once I started to write and also take care of my wardrobe by myself, I’d make lists behind the lined notebooks I carried to school; lists, scribbles, strikethroughs and fresh notes – on which to wear on what day of the Puja, what time – morning, evenings being of different slots for outings. And how with splitting kitchens, spreading “nuclear” germs, piling up priorities and growing socalled inconveniences, the elaborate shopping trips ahead of the Puja times first reduced to money-gifts ("Boudi, please ask Tua to buy something of her choice!") and then, eventually, to cancel-outs (You know, kids are getting old. And they have such a lot of clothes already!) Today, my little daughter, all of four years, gets her new clothes for Puja just from her closest kin, us ourselves, my parents, and my brother – albeit in multiples! Will she ever know what Puja clothes meant when I was her age…?

Before I could gather myself back to tell them all about wearing new clothes for Puja, they had already given up waiting and were already at their second guess:

O yes, very true. Oh but am I not a steadfast non-believer, an atheist? But then, who cares! Didn’t I say – Durga Puja is not about religion or customs, and not about logic and rationality either! It’s magic. The magic that created around us when my grandmother would hum the stories to me, I cuddled next to her, under the same blanket. She spoke in a soft, slow way, almost like a chant, as she lulled me to sleep every night. That story, that when Durga teasingly, playfully hid away the one of the count of hundred-and-eight blue lotuses, Raam offered his one eye to replace the lost lotus, faced with the test of his dedication… Among the stories I have grown up with, my childhood, my very own source of magic!

But before they take another dig, I had to blurt out something. I AM the Bong, isn't it?

“You know, the kind of money they spend on each community Puja.. The idols later sell as art pieces at big museums.. And I hear art college students these days make a decent living just out of Durga Puja productions.. They just work towards these 4 days the whole year and it pays them off well enough.” – I tell them. Eyes of disbelief, I can see. Never mind! I continue, still.

“And then, to celebrate Durga Puja,” – I tell them – “the entire city of Kolkata comes to a stop on this event, for all four-to-five days. Offices, schools, everything, may be just other than emergency support functions. It’s not a religious occasion anymore, you see!”

Ah.. I could see my audience is fidgeting, losing engagement. But I could not leave Durga Puja at this, it's criminal. So, after a hasty thought I add a new angle, hoping they’d like that some better –

“You know,” I tell now… “Raamnavami is just one of the many tales behind Durga Puja. Actually, in the Bengali sense, we more think of Durga Puja from a home-coming point of view.”

“Yes, homecoming…” – I insist. I proceed to explain.

Actually, all said and done, it is really a ten days' long ritual about a married daughter coming home. Mahalaya marks the day when the father, the mighty Himalaya who’s the father of Uma (aka Durga) sets out to bring the daughter home from her in-law's, upon his wife coaxing her into bringing the daughter home, because it’s been long, because she’s missing her, and because, she thinks, she must be home-sick. Over the last five days of the ten, we celebrate the homecoming of Durga, the daughter, with her children (and pets). And then, sooner than we realize, it’s time to go back! In tears, on the day of Bijaya Dashami, she sets out on her return journey. We bid her goodbye at the Ghaat, as she slowly, very slowly, takes to the water, immerses. We wipe our eyes and come back home.

“So really, Durga Puja symbolises the annual homecoming of married daughters to their father's home.” – I thought I had just said enough and no more, when the inevitable had to come. In shape of a most innocent query:

Post Script: You cannot possibly know, really know, Durga Puja unless you’ve your past years neck-deep into nostalgia about it, but yet, if you think you want to experience the magic, for once, we cordially invite you to join us. Be our guest! Visit us at the Sushant Lok Durga Puja, Sushant Lok Community Center ground, near Paras Hospital, opposite to Shalom Hills school. See you there! 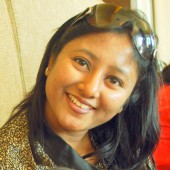 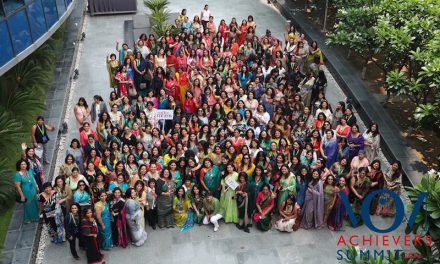 The Mom Achievers Summit 2019- An Experience of it’s Kind 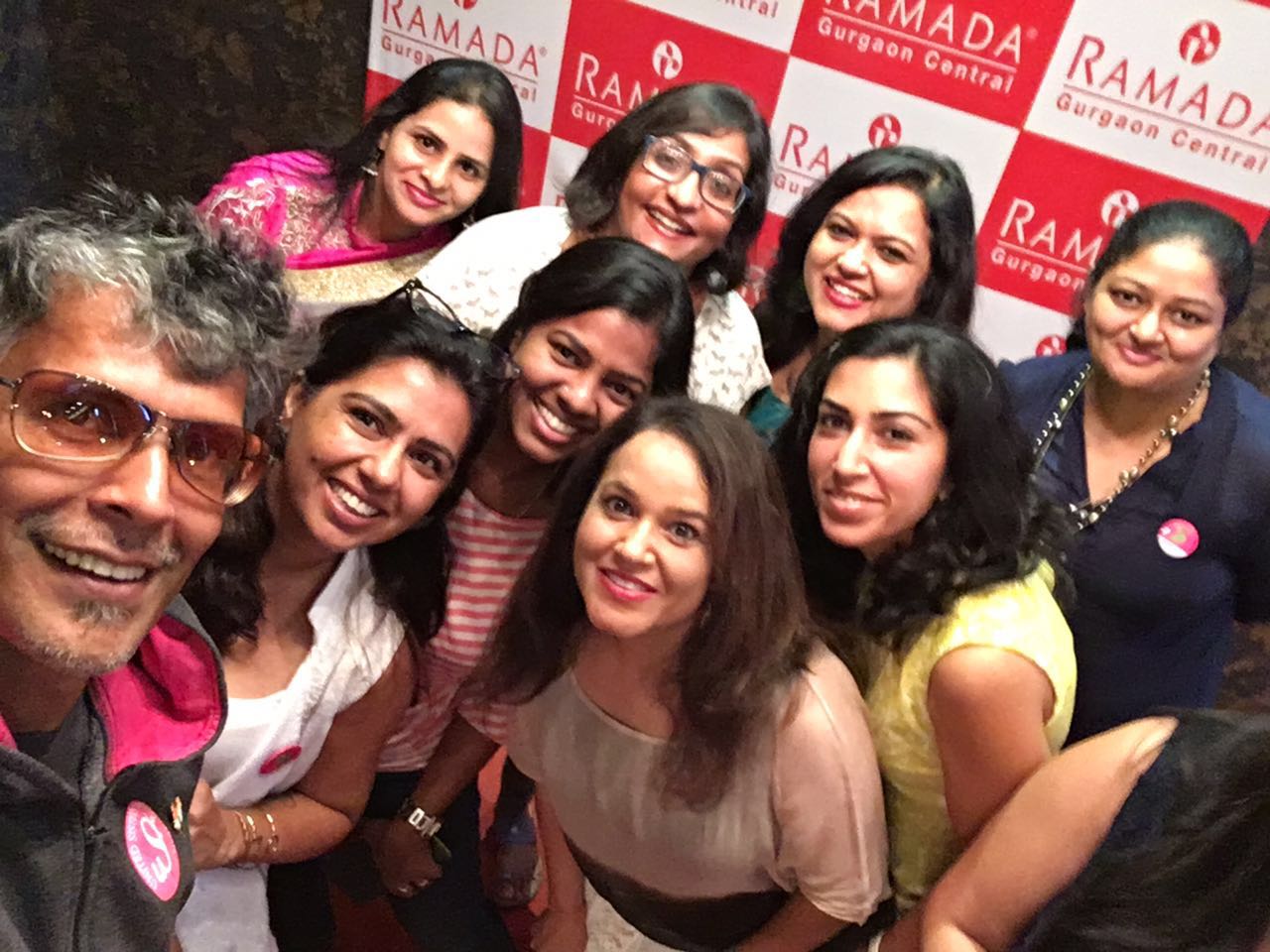 Get Up and Run!